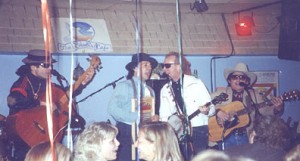 Jim (far L) in the first, and smallest, of Side Burns’ three suits

When we came up with the concept of Run C&W, we set out to create four distinct characters. The Burns Brothers were non-identical quadruplets raised separately, with rhythm and bluegrass in their veins. My character, Side Burns, was a combination of Barry White, Bill Monroe and Biz Markie. His appetite for food and women was insatiable. As Run C&W’s fame grew, so did Side’s girth. In order to fill out his first warm up suit, an extra-large black and red Adidas, I would put on 4X size panty hose, and an oversized t-shirt and stuff them both with foam rubber, before slipping on the suit. 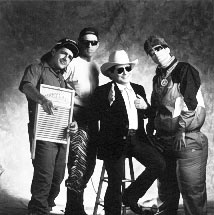 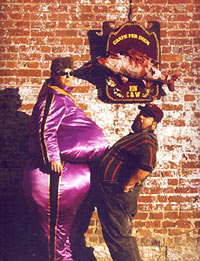 When it came time to do the second album, Row vs. Wade, I went back to Gillian. This time not only did she design the body enhancement, she tailored Side’s purple-and-gold satin hooded outfit, which became his trademark. This outfit was so big, that in order to transport it, I had to pack the butt-and-legs portion and the upper torso separately in oversized bass drum cases. The padding was heavy and hot. When we hosted the MCA Fan Fair Show in June 1993, I had to wear a fisherman’s vest and shorts with all the pockets filled with blue-gel ice packs under the fat suit to keep my body temperature normal.